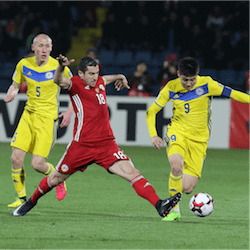 Kairat received a rapturous ovation from Kazakhstan Premier League fans earlier last month after they defeated long running champions Astana. Kairat fought their way from the number 3 finishers in 2013 to take the number one spot from the 3 time League champions Astana.

Many people point to transfers with the Astana squad that could have had an adverse effect on team dynamics. The team lost Askhat Tagybergen, Sergey Maly, and Djordje Despotovic while Roger Cañas was on loan.

A Solid And Familiar Team

Kairat on the other hand pretty much remained intact from their previous year’s line-up. The only additions were defender Yeldos Akhmetov, Georgy Zhukov a Russian midfielder and Ivo Ilecic from the German Bundesliga. These players definitely added some additional skill and experience to the team and played a large role in helping Kairat push through the Astana defence.

After their defeat, Astana may be looking to re-evaluate their team composition as clearly some of their original magic has gone missing. It is still early days for the Kazakhstan Premier League so we will see what develops from these new squads.

In the Astana and Kairat Super Cup showdown, Kairat kept the pressure up in the wings. Despite a few defensive mistakes, Striker Junior Kabananga could not capitalise. By half time both teams were yet to score.

In the second half it was clear that Astana were on the back foot, attempting to hold off an aggressive Kairat. You could see that there was definitely something missing in Astana. They did not seem to have the unity that was present in their previous title defences.

Kairat was on fire however, perhaps thanks to the weakness they saw in Astana. From here Keirat stepped up their defence, finishing with a 2-0 victory. The match is scheduled for the 10th of June. In the late stages of the second half, Kairat landed a goal thanks to Sesar Arzo.

Earlier this week Astana and Kairat saw many of their players off to Denmark for a series of matches ahead of the World Cup qualifiers.