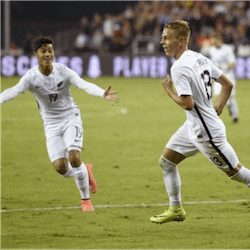 The New Zealand football team, dubbed the All Whites, will be opening this year’s FIFA Confederations Cup with a match against the hosts, Russia. It has been a long and gruelling journey for the Kiwi team who has conquered every challenge that has come their way so far.

They earned their spot in the Confederations Cup by taking home the 2016 OFC Nations Cup. New Zealand defeated the Solomon Island, Fiji, Vanuatu and New Caledonia before they faced Papua New Guinea in the finals.

The game was a 0-0 draw until Marco Rojas snatched the victory through penalties. Praise was also given to Stefan Marinovic, the New Zealand keeper who managed to deflect every shot New Guinea took.

Faith In The Side

Manager Anthony Hudson has full confidence in his side’s chances in the Cup, stating that he believes New Zealand can beat any team taking part this year.

New Zealand however has an uphill battle ahead of them. Morale can only be low as they enter the tournament off of two defeats. The team played friendlies against Northern Ireland and Belarus and lost both matches 1-0.

New Zealand drew a Group 1 appearance alongside Russia, Portugal and Mexico. The team first faces Russia in the opening match before they face Mexico and finally Portugal.

All in all the team will have travelled a total of almost 20 000 Km to take part in the Cup.

Midfielder Clayton Lewis has stated that he wants the world to take notice of the New Zealand team and they are planning to win their first match against Russia.

New at this year’s Cup will be the introduction by FIFA of new anti discrimination protocols. Special match observers will be on duty to monitor crowds and report any discriminatory behaviour.

The Confederations Cup will be the testing ground for these new measures and if they are successful FIFA may implement the process at more and more events in order to curb offensive and unruly crowd behaviour at all FIFA sanctioned events.

Fans will certainly be holding their breath the coming weekend with high hopes for New Zealand’s opening performance against a strong Russian team.