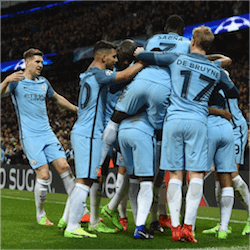 New Zealand football fans following England’s FA Cup 2017 have been kept in suspense as they await the complete list of quarterfinalists. The match between Manchester City and Huddersfield Town on 18 February saw the second-division West Yorkshire side hold City to a 0-0 draw, requiring a replay.

That match was held on Wednesday in Manchester, and City set the record straight as to just which side is in the first division in imperious style. Two goals, one of them a penalty, from Sergio Aguero, were joined by scores from Leroy Sane, Pablo Zabaleta and Kelechi Iheanacho.

Huddersfield fans would have been heartened by their team’s opening the scoring, when Harry Bunn slipped a sneaky goal through City keeper Claudio Bravo’s legs in the seventh minute. But it was downhill from then on; City were 3-1 up at half-time, and finished undisputed victors on 5-1, with substitute Iheanacho banging in the last score on the stroke of full-time.

The FA Cup quarterfinals will be played on the Saturday, Sunday and Monday of 11-13 March. City will play the first match away on Saturday, against first-division side Middlesborough. The North Yorkshire team has been assured of a QF berth since 18 February, when they beat Oxford United 3-2.

The second quarterfinal on Saturday is one New Zealand betting enthusiasts won’t want to miss. Fifth-division side Lincoln City has made history this season, reaching the FA Cup QFs for the first time in the club’s 133 years of existence. Along the way, they beat second-division clubs like Brighton and Hove Albion and Ipswich Town, and even first-division Burnley.

Lincoln face Arsenal on Saturday, so they have a definite uphill battle. The Gunners have won the FA Cup 12 times, which makes them joint record-holders with Man United. However, Lincoln have everything to play for, so an upset might be worth a punt.

On Sunday, Tottenham Hotspur hosts third-division Millwall, with Spurs the favourites. Chelsea at home to Manchester United on Monday is likely to be a thrilling match to end the QFs, as both are first-division sides that have spent lots of time in the top echelons of English football.