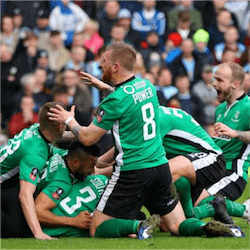 Although the northern hemisphere soccer season is drawing to a close, the New Zealand sports betting community still has some iconic matches to punt on. These include the pinnacle of English football, the FA Cup Final at Wembley on May 27.

Just as Leicester City came out of nowhere to win their first-ever Premier League Championship last year, the 2016-17 FA Cup has seen not one, but two lowly clubs punching above their weight. Fifth-Division sides Lincoln City and Sutton United both made it to the fifth round with a series of upset victories, much to the delight of their supporters and the punters backing them.

Sadly for Sutton, Round 5 was as far as they got, after beating Leeds United, AFC Wimbledon, Cheltenham Town and Dartford in the previous rounds. The South London side met Highbury rivals Arsenal on Monday night, and the Gunners had no trouble securing their quarter-final spot with a 2-0 win.

Lincoln City finished fifth in the Second Division in the 1901-02 season, their highest position in English football over 133 years… until this season. Their progress to the 2017 FA Cup quarter-final has been a profitable betting adventure, considering they knocked out Burnley, Brighton & Hove Albion, Ipswich Town, Oldham Athletic and Altrincham along the way.

Lincoln will now meet Arsenal in London for the March 11 quarter-finals, and they will attract a lot of attention as the fired-up underdogs with nothing to lose and everything to play for. In two other quarter-finals, Manchester United will travel to Stamford Bridge to play Chelsea, with Tottenham Hotspur at home to Millwall.

Middlesborough is the only quarter-finalist still unsure of their next opposition. Manchester City and Huddersfield Town played to a 0-0 draw on Saturday, so they will have to replay the match next Wednesday, February 28, to determine which of them will face the Yorkshire side on March 11.