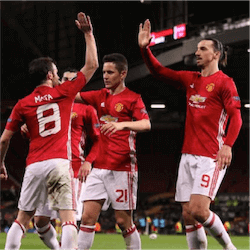 The sounds of Manchester fans honouring their team circled around the Friends Arena after Manchester United defeated Ajax in the Europa League Final.  In the soccer world, Manchester’s 2-0 win over Ajax was certainly a triumph for England’s biggest football club. But the win had even more significance for the team’s home city that are still grieving in the wake of an attack.

The city of Manchester was struck by tragedy on Monday when 22 people were killed by an apparent suicide bomber at an Ariana Grande concert. Manchester United players were clearly feeling the effects of the attack and flew to Sweden with a mission. Their aim was to deliver a performance that would serve as an honourable tribute to the victims of the attack.

The team succeeded in its mission with a convincing display of passion and strength. Their performance and subsequent win turned an ordinary match into a game that fans will remember for a very long time. Speaking to the press, the team dedicated their win to the victims and their families. While it may just be another game, another trophy, it meant a lot to the fans and the city of Manchester.

The first of Manchester’s two goals came courtesy of Paul Pogba who scored a beauty off a deflected shot just 18 minutes into the game. Henrikh Mkhitaryan added the second goal in the 48th minute with a close-range corner that hooked straight into the goal. United handled the match a lot better than their opposition. The Ajax side, who were playing in their first European final in over 20 years, sported a team that included six players under the age of 21.

The match was seen as a clash between the youthful exuberance of the Ajax team and the efficiency of Jose Mourinho’s side. Clearly, United came out ahead, with the players dominating the Ajax youngsters with their superior game management and physical presents. For Mourinho, the match was about exploiting their opponent’s weakness. This meant keeping a strong defensive while using Marcus Rashford for his pace on the break. It also meant sending long balls to Marouane Fellaini, a player whose physical presence dominated the attacking front. As for Pogba, the side’s most expensive player stood out in midfield with his performance culminating in a goal, even if it was a bit fortunate.