Messi Agrees To Contract With Barca 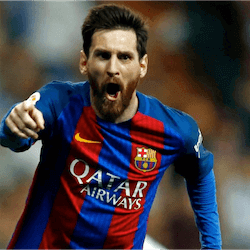 Lionel Messi, touted as one of the world’s greatest footballers, has agreed to a contract extension that will see him extending his time with Barcelona until the end of 2021. The 30-year-old Argentinean was reportedly linked with a number of Premier League sides including the likes of Manchester City and Chelsea. Now it seems, Messi is ready to commit to the club he joined at the tender age of 13.

In a statement released on their website, the Barcelona Cub said that Leo Messi and FC Barcelona have officially agreed on a contract renewal that will see him staying with the club until the 30th of June 2021. According to the Club, the deal will be singed in the next few weeks when Messi returns to the club for pre-season training. While it has not been confirmed, reports have been circulating that the buyout clause for Messi’s latest contact could be as high as 300 Million Euros.

Making his debut as a senior at the age of 16, Lionel started his career playing in a friendly against Porto. To date he has racked up a total of 8 La Liga tiles, 4 Champions League wins, and 5 Copa del Rey triumphs among his extensive list of football honours. It is no wonder then that FC Barcelona is happy to have him locked in for the next few years. In their press statement, the Club said they were very happy with the commitment of Messi to the Club.

Another 4 Years with FC Barcelona

They fondly refer to Lionel as the best player in history, and one that spent the better part of his professional career playing for Barca. He has led the team to successes the likes of which have never been seen before in Spain or in the world football for that matter. Messi first joined Barcelona in 2000, coming from the Newell’s Old Boys as 17-year-old prodigy. He made his first competitive appearance for the team against Español.

In 583 matches, Messi has scored a club record of 507 goal and picked up the Ballon d’Or five times, a feat no other player has come close to achieving. FC Barcelona feel that Messi is still in the prime of his career and has a lot still to give. With 13 seasons under his belt, the Argentinean will continue to give Barca fans something to look forward to for the next four years.