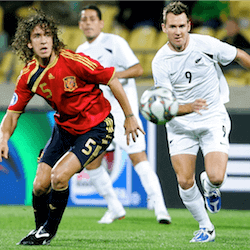 All Whites Gear up For Confederations Cup

This coming June, punters and football fans will have another reason to smile. The 2017 FIFA Confederations Cup is scheduled to take place from the 17th of June to the 2nd of July. The origins of the Confederations Cup date back to 1992 when it was first Organised by Saudi Arabia and called the King Fahd Cup. Since 1997, FIFA has taken over the running of the competition, holding it every four years in the year before the World Cup.

The Confederations Cup is a prestigious football tournament for eight competing teams. The contested sides include the holders of the six confederations champions, namely the UEFA Champions, the AFC, the OFC Championships, the CAF, the CONMEBOL and the CONCACAF champions. The Current FIFA World Cup holder also gets a place in the Confederations Cup as well as the host Nation that makes up the eight teams.

The eight qualifying teams are then split into two groups and play a round-robin tournament where each team plays each other once for a total of three matches. The winners of the first group then play the runners up from the second group and vice versa. This constitutes the semi-final stage of the tournament. The Winners of each of the semi-finals then meet for the finals while the runners up play each other for third place.

The 2017 Confederations Cup will be the 10th Cup Tournament of its kind and will be held in Russia who will go on to host the World Cup next year. Including Russia, the seven qualifying teams include:

In preparation for the Confederations Cup, the New Zealand national side (All Whites) have confirmed their build-up program including matches against Belarus, Northern Island as well as the Irish club side Cabinteely.