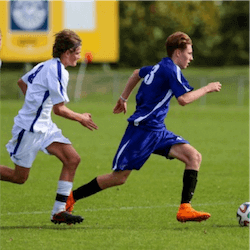 Despite fears that they might have left it a bit late, the men’s under-17 football team has scraped through to qualify for the World Cup in October this year. The New Zealand under-17 team pulled off a sensational win against Papua New Guinea in the Oceania Championships semi-final to book their place at one of the biggest sporting events in the world.

The match against Papua New Guinea was always going to be a tough one. If the score was level at full time, the game would have hat to proceed to a penalty shootout to determine who was going through to play the finals against Caledonia. With New Zealand fans on the edge of their seat, it seemed as if the boys were going to miss out on a place in the World Cup for the first time since Australia officially left the Oceania Federation in 2006.

All fears were subsequently quashed when Oliver Whyte scored the winning goal in the third minute of stoppage time. For New Zealand, the game got off to a good start. After just three minutes of play, Papua New Guinea defender Aben Pukue fluffed a clearance giving the Kiwis the chance to slam the ball into the back of the net. The 1-0 lead didn’t last long though as Barthy Kerobin slotted a magnificent volley to find the back of the New Zealand net.

Oliver Whyte to the Rescue

At half time, the score was 1-1 at the Stade Mhina in Tahiti. Going into the second half, New Zealand were showing signs of nerves as their chances of a World Cup qualifier slipped further from their grasp. The second half did have a bit of action as both sides had a chance to take the lead. For New Zealand, it was the 76th minute when it all came together only to be denied the goal due to a foul on the opposition’s goal keeper.

It seemed New Zealand were destined for a penalty shootout. That was until Whyte stepped onto the field. With only four minutes of play as a substitute, Whyte managed to find the back of the net again, giving the Kiwis the much needed win and a ticket into the World Cup. New Zealand will now play Caledonia in the Oceania Championship finals. It should be an interesting game as both teams automatically qualified for the World Cup and can focus solely on the game at hand.