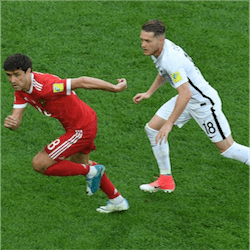 The All Whites first match of the Confederations Cup ended with a disappointing 2-0 loss to the host nation Russia. It was a convincing win for the Russians, which could have been much worse if it weren’t for New Zealand goalkeeper Stefan Marinovic pulling off some brilliant saves. New Zealand did have a few chances though; first with Ryan Thomas who was denied with a brilliant piece of goalkeeping from Igor Akinfeev and then a Chance for Tommy Smith whose header cleared just off the line.

Most of the game was an untidy mess from the All Whites. When they did get possession, they ended up wasting their opportunities and bumbling the set pieces. It meant the New Zealanders were constantly under pressure from the more dominant Russian team. The All whites started well, pushing out of the gates with gusto, making decent inroads into the Russian half. But after a few minutes of solid forward movement, the New Zealand team gave away possession and barely touched the ball for the next 25 minutes.

The All Whites struggled to get back possession and when they did, they didn’t use it well enough to enforce any form of dominance on the Russia. On the other hand, the Russian team eased into the game, outflanking the New Zealand side with Deklan Wynne and Kip Colvey constantly outnumbered at the back. New Zealand were lucky Russia didn’t score earlier in the game after Viktor Vasin struck the post and the ball rolled along the goal line. A few minutes later, New Zealand were in hot water again with Tommy Smith coming to the rescue.

Missed Chances for Smith and Thomas

After holding of the brief onslaught, New Zealand seemed to find their feet which could have amounted to something if Wood had found the back of the net from a free kick penalty on Thomas. Given the amount of possession and forward momentum the Russians had, a goal was inevitable at some point. How it happened was more a result of New Zealand’s mistake than anything else. A silly pass from Marco Rojas to Kip Colvey, gave the Russians their chance to pounce.

It was Glushakov who forced the ball home thanks to Boxall, putting the first points on the board. Russia sealed the game in the second half with Smolov cracking home a second in the 69th minute. New Zealand had the chance but with Smith and Thomas being denied goals, the fate of the All Whiles Confederations Cup opener was decided.