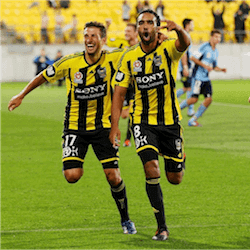 Wellington Phoenix Holding by a Thread

For the Wellington Phoenix A-League football team, their hopes of making the A-League playoffs are still alive, but just barely. After an embarrassing 3-1 defeat at the hands of the Western Sydney Wonderers, Phoenix are now five points shy of a top six position with four games left to play in the regular season. As insurmountable as the odds may seem, more worrying for the team was the dismal performance in a crucial match where even a draw would have made a big difference.

A win against the Wonderers would have propelled the Phoenix side into sixth spot, giving them some much needed breathing room going into the final month of the regular season. Instead, the side fell apart on the field and are in real danger of completely flunking out in the final weeks of the competition. For the Wonderers, it was a match that rejuvenated the team and boosted their moral going forward. Brendon Santalab, the Wonderers striker was the key player on the day.

Scoring two of the three goals against the Phoenix, Santalab took his goal tally to seven goals in the last four matches against the Wellington side. Santalab’s second goal, a brilliant close-range header, gave the Wonderers a clear three-goal lead and a massive psychological edge over the Phoenix. From the start of the match, the Phoenix were sluggish and stagnant. After relentless pressure from the forwards, it was the Argentinian Nico Martinez who finally steered in the cracking shot from the edge of the penalty area.

A Must Win Against the Newcastle Jets

With just nine minutes on the clock, the Phoenix were in for a tough time. Adam Parkhouse, the Wellington left back was made a target and was understandably replaced by fullback Tom Doyle inside of half an hour. Just as the Wellington side was finding their feet, Santalab fired a thunderous shot past Moss who got a hand on the ball but could not stop it from going in. Santalab’s second goal gave the Wonderers their three-point lead.

With fifteen minutes left to play, a free kick by Gui Finkler reduced the deficit but it was just too little too late. The Phoenix forwards were completely ineffective managing only two further shots at goal. To add to their woes, the Phoenix will lose seven players for the next game due to international duties. For coach Des Buckingham, the next match is now a must-win, non-negotiable home game where the Phoenix face off against the New Castle Jets on Sunday.