Real Madrid Go One Up In Champions League 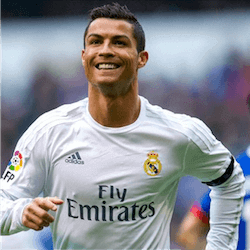 A brilliant hat-trick from Cristiano Ronaldo saw Real Madrid earn a 3-0 win over arch rivals Atletico Madrid in their first leg Champions League semi-final match. Playing in all white, Real Madrid did more than enough at home to secure the win and put at least one foot into the Champions League final in Cardiff. While they may have been playing without Gareth Bale due to an injury, Real Madrid took it to their rivals once in again in Europe’s biggest football competition.

Real faced Atletico for the fourth consecutive time in the Champions League. In all of their previous meetings, Real has eliminated Atletico and it seems, history is going to be repeating itself. With a 3-0 victory at home, Real have a massive lead ahead of next week’s second semi-final leg. The men in white dominated the first half as Atletico looked on the back foot from the first few minutes. For Real Madrid, Luka Modric was the man carrying the ball into the open space for a chance to attack.

Game Over For Atletico

It was just a matter of time before Real would have the ideal opportunity. In the end, it only took 10 minutes for Ronaldo to slot home a cross from Casemiro to make it 1-0. Bolstered by their quick lead, Real went in for more attacking phases but were thwarted by a couple of superb saves by goalkeeper Jan Oblak. Atletico manged to keep themselves in the game but showed very little forward movement. This gave Ronaldo the freedom to play his worth. In the 73rd minute, Ronaldo blasted home a stunner from inside the box to put the team 2-0 up.

Ronaldo’s hat trick came 13 minutes later when Dani Cavajal set him up for an impressive display of football hustle followed by the perfect kick. If you are keeping score, that is a total of eight goals in the last three Champions League matches for Ronaldo. His contributions in this game most certainly put Real on the verge of making the Final. What we have to ask now is what will happen to Atletico Madrid. Is there a way to come back for the team? For every goal Real Madrid scores in the second leg, Atletico will need to score five more in order to advance to the final.