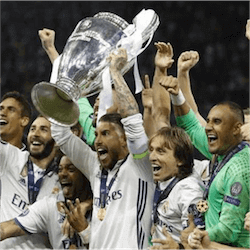 Real Madrid has officially become the first team to successfully defend a UEFA Champions League title. Thanks to an outstanding effort by Cristiano Ronaldo, Los Blancos cruised to a 4-1 victory over Juventus in the Champions League final. In a controversial move, Zinedine Zidane opted to open with Gareth Bale on the bench while Isco held onto his spot in the opening line-up. Most noticeably was the missing face of James Rodriguez who was left of the squad altogether.

Juventus had a great start to the game. Within the first 10 minutes, both Miralem Pjanic and Gonzalo Higuain forced Real’s Keylor Navas to produce a set of crucial saves. After that, the action died down a bit until the Spaniards opened the scoring in the 20th minute. It was Ronaldo who did the honours, exchanging a few passes with Dani Carvajal before hammering the ball into the far corner. It didn’t take long for Juventus to bounce back though. Just seven minutes later, Mario Mandzukic controlled a well-timed kick from Higuain before slotting one into the back of the net with a brilliant bicycle kick.

A Good Day for Ronaldo

Heavy forward movement by Massimiliano Allegri carried on through the first half with a number of fouls disrupting the flow of the game. Neither side found the advantage and the score remained one-all at half-time. The second half opened up where the first left off. After a quite start, Los Blancos nabbed their second goal thanks to a deflected effort from Casemiro. While Juventus fans were waiting for another comeback, Real took the opportunity to extend their lead. Four minutes after their second goal struck home, Luca Modric launched the ball at the far post where Ronaldo was perfectly placed to tap the ball home and to take the score to 3-1.

Allegri was desperate to hold onto the game and introduced Juan Cuadrado as a replacement for Andrea Barzagli. On the other side of the field, Zidane made his first change on the 76th minute with Karin Benzema coming off for Bale. To make matters worse for the Italians, Juve were reduced to 10 men when Cuadrado was sent off for booking a second offence in the game. Real Madrid were able to close out the game in the 90th minute. Marcelo took a brilliant run up field, finding Marcos Asensio who neatly slotted home their fourth goal of the match given Real their 12 Champions League Title.