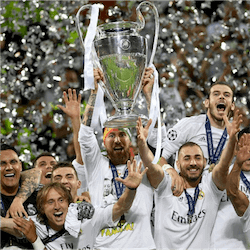 Real Madrid is celebrating their record-breaking 12th European Cup with their thousands of supporters after they returned to the capital of Spain. Their journey took place after securing triumph in the final game of the Champions League that took place in Cardiff, in Wales.

The team was honoured by both the mayor of Madrid and that city’s regional president, after which the players boarded an open-topped bus to begin a slow ride through the throngs of fans who had turned out to show their support. The Cibeles Square was filled to capacity, as is usual with these kinds of celebrations, as this is the city’s traditional gathering spot for them.

The Presentation of the European Cup

Once in the Cibeles Square, Marcelo and Sergio Ramos, captains for Real Madrid, made their way up a temporarily installed set of stairs in order to present the European Cup trophy from above the statue located in the square’s fountain.

After this performance drew to a close, the Real Madrid team headed over to the Santiago Bernabeu Stadium, where once more the stands were packed, and enjoyed an intricate show of lights and videos during which each of the team’s members were introduced on an individual basis.

The biggest applause, however, was reserved for Ramos and Ronaldo; with the latter waving a Portuguese flag as he strode into the spotlight towards his waiting teammates. They were on a makeshift stage, which had been set up in the pitch’s centre.

Ramos told the enthusiastic crowd that his team firmly believed that their hard work would allow them to reap the benefits there from, and that this had been proven with their win, and proudly donned a fake crown while Spain’s flag was arranged around his shoulders.

Ronaldo Joins the Crowd in Lauding Him

Once Ronaldo was able to take his place behind the microphone, it seems he could not resist chiming right in with the crowd as they chanted “Cristiano, Ballon d’Or”, which called for him to receive that coveted award, the Most Prestigious Player.

Ronaldo managed to score twice during Saturday’s game, when his team went on to beat Juventus with a final score of 4 to 1 in the last game. This saw Real Madrid become the very first soccer team to win titles back-to-back during the entire era of the Champions League.

Just 2 weeks ago the city’s team was celebrating the fact that it had managed to win the first title for the Spanish League in 5 years. Now, thanks to the fact that this triumph is the team’s 3rd European title win in just 4 seasons, Zinedine Zidane, their coach, can safely say that he has managed to re-establish Madrid as the continent’s premier team.

Zidane has not even served 2 full seasons in the position of head coach as yet, but has nonetheless managed to secure not 1 but 2 Champions League crowns for his team, adding to the title he won as a player in 2002.