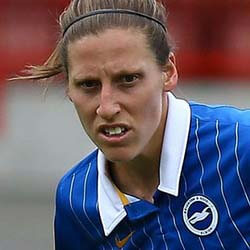 Football Ferns star Rebekah Stott has confirmed having been diagnosed with blood cancer. The star defender shared her Stage 3 Hodgkin’s Lymphoma diagnosis on social made on Wednesday.

The 27-year-old said though she realised the journey will be a challenge, and difficult, it was at the same time important to her to meet every obstacle head-on, and with a positive mindset, so as to help inspire others living with the disease.

Stott, who helped Melbourne City win the 2020 W-League grand final before departing to join Brighton, had spent time playing for Brighton and Hove Albion, but recently decided to return back home to Australia for medical reasons. She received her diagnosis while in quarantine.

She said that she had been glad to know exactly what had been going on after she previously discovered two growing lumps on her neck. But although Stott says going through the motions of first the discovery and then the biopsy and results had been stressful, she was at the same time also grateful for all the support she had around her.

The young star, who made her Football Ferns debut in 2012, also confirmed that her lymphoma had progressed below her diaphragm, which meant it was now regarded Stage 3 cancer. She said she’d now require intense chemotherapy that would involve four months of a 21-day chemo cycle.

Stoll said she believed that while she would probably end up feeling gravely ill, she was relying on being an athlete and being fit and physically strong, to help her deal with the chemo treatment programme that now lies ahead.

Phenomenal news this week is that the Wellington Phoenix will, more than 400 days after they last played a game on home soil, be returning for two games in New ….

Wales football boss Ryan Giggs has been arrested following allegations of assault made by his girlfriend. Police questioned Giggs after they on Sunday evening around 10:05 p.m. got called out ….