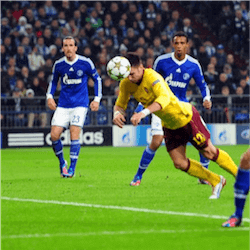 After Friday’s draw, New Zealand football fans at last know how the final eight will match up in the 2016-17 UEFA Champions League quarter-finals. The first leg will comprise two matches on Tuesday, 11 April, and another two on Wednesday, 12 April. The second leg, with first-leg away teams hosting their opponents for the return matches, will take place on 18 and 19 April.

The teams most punters will be following avidly are those that sailed through the Round of 16 without any losses. Real Madrid handed out two 3-1 defeats to Napoli, and Bayern Munich had an even more impressive round against English side Arsenal, winning 5-1 both home and away. The two will meet in their first leg on Wednesday, 12 April, in Munich.

Atletico Madrid beat Bayer Leverkusen 4-2 in their first leg, followed by a 0-0 draw that put the Spanish side through, also undefeated. Their quarter-final opponents are the English underdogs Leicester City, who despite being the reigning English Premier League Champions, are still having ups and downs.

They lost their Round of 16 first leg to Sevilla 2-1, scraping into the quarter-finals with a 2-0 victory in the return leg. It’s quite possible that the international talent and top-level experience of Atletico Madrid will prove too much in the quarter-finals round, and end Leicester’s UEFA Champions League dream.

Juventus-Barcelona Matches Set to be Epic

The quarter-finals opponents who promise the most thrilling football, we reckon, are Juventus and FC Barcelona. The Italian side was also unbeaten in the Round of 16, taking 2-0 and 1-0 wins against Porto.

However, it was FC Barca that made history in the last round, after succumbing 4-0 to Paris Saint-Germain in the first leg: a deficit that no team has ever overcome in the second leg of a knockout round. At home in Camp Nou, however, Barca set a new world first, winning 6-1 to go through to the final eight. So both legs of this quarter-final are sure to produce some exciting football.

Monaco was lucky to beat Manchester City on away goals after finishing 6-6 overall in the Round of 16, and they are set to face Borussia Dortmund in the quarter-finals. The German side, after coming back in the Round of 16 from a 1-0 first-leg loss to Benfica to win the second leg 4-0, could have the edge.