Ronaldo Says No To Chinese Offer 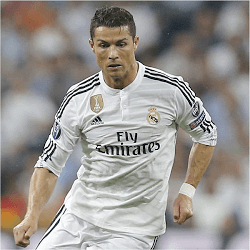 Jorge Mendez, the manager of the talented football star, Cristiano Ronaldo has come out and stated that they have received a huge offer to purchase the star from an unnamed Chinese League.

Ronaldo is currently under contract to Real Madrid and his manager stated that they are not interested in taking the offer. Furthermore the sum offered, 300 million euros, would only be the transfer fee for the star. He will be paid an additional yearly salary of 100 million euros.

Mendez said that both he and Ronaldo did not seriously consider the offer as Ronaldo is very happy at Real Madrid.

This offer is a record breaking offer in football. It will be three times the record amount. That distinction is held by the 105 million euros that was paid by Manchester United to Juventus.

This record breaking sum was paid for Paul Pogba in August of 2016.

Ronaldo has just resigned to Real Madrid in November, this time until 2021 so he seems to be too satisfied with his lot to even consider such a huge move.

China has become a huge player in international sports acquisitions. In 2016 alone they have paid huge sums to gain some of the world’s finest football stars. Recently a former Manchester City player, Carlos Tevez signed with Shanghai Greenland Shenua for a reported $108 4000 per week.

He is joined by two Newcastle players, Obafemi Martins and Demba Ba. The team is to be managed by former Chelsea and Tottenham manager Gus Poyet. Last week Brazilian mid fielder Oscar was signed by Shanghai SIPG for £52 million.

Cristiano Renaldo is one of the world’s best soccer players. As captain of his home team Portugal, He led the country to the top of the European Champions League. He has won multiple player of the year awards including the 2013, 2014 and 2016 FIFA Ballon d’Or.

It is no surprise that he was offered such a vast sum as his experience and raw talent will be invaluable for the emerging Chinese football market. What this means for world soccer is still unsure. China is definitely a very large untapped market but many players feel that the culture shock may be too much no matter what amounts of money are offered.

2017 may hold more high profile acquisitions, and if the Ronaldo offer is anything to go by, there is certainly funding in place for China to start producing world class football teams.