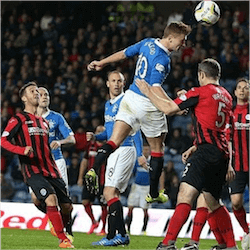 New Zealand’s online betting enthusiasts still have plenty of European football to enjoy before the 2016-17 season in the northern hemisphere closes. The Scottish Football Association Challenge Cup, or simply the Scottish Cup to most fans, has seen five knock-out rounds since September, and is now approaching the quarter-finals. All four will be played on the weekend of March 04-05.

Seven teams are already through, and it is no surprise to see Scottish Cup record-holder Celtic F.C., with 36 championships, among them. They might well take that record to 37 this year, if their 6-0 trouncing of Inverness to make the quarter-finals is any indication.

Celtic’s Glasgow arch-rivals Rangers are the second-most successful team in the Scottish Cup’s 144-year history, with 33 championships in the bag. They also have a shot at improving that record this year, after beating Greenock Morton 2-1. Rangers will face Hamilton Academicals in the quarter-finals, after the latter needed a one-all draw, another 1-1 replay, and finally a 3-0 penalty shoot-out to knock out Dunfermline Athletic.

Ayr United is the seventh confirmed Scottish Cup quarter-finalist, due to play the first QF match on Saturday, March 04. They are also through courtesy of a replay, beating Clyde F.C. 2-1, after their first clash ended in a 1-1 draw.

Ayr’s quarter-final opponent will be revealed on February 22. Defending Scottish Cup champions Hibernian are scheduled for a replay against Heart of Midlothian on Wednesday night, after a high-intensity encounter that nevertheless ended in a goalless draw last Sunday.

Most fans favour Hibernian to snap up the last quarter-final spot, but Hearts might just pull off an upset on Wednesday.