There Is Still Some Hope For All Whites 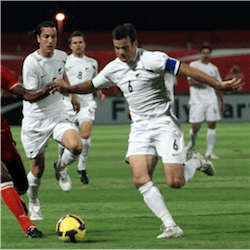 There’s Still Hope for The All Whites

Despite crashing out of the Confederations Cup, the All Whites believe they are still on track for qualifying for the World Cup even though they have an uphill climb to get there. With the Confederations Cup out of the way, the New Zealand team now shift their focus to their next big challenge of 2017, the Oceania Playoffs.  The All Whites must face the Solomon Islands and then hopefully a tie game at home and away against whichever South American team places fifth.

This is a prospect that many teams would find daunting, especially the tie in South America. Australia for example, only managed to defeat a South American team once in three attempts and it came with a penalty shootout. Despite all this, New Zealand are feeling confident that they have a chance. The team is feeling particularly confident after their progress against Russia in the Confederations cup.

Speaking to the press, All Whites coach Anthony Hudson said that whichever team they face in November, if they get there, will be fifth for a reason. This would mean that the team lost a few games and have some form of weakness that New Zealand could exploit. Hudson said that there is not a single player in the team that doesn’t think they have a chance.

The Opportunity to Defy History

New Zealand have never been able to beat a South American team before, never even coming close while visiting the sub-continent. Chris Wood, the New Zealand captain believes they have what it takes to defy the odds come November. Wood said that the team believes they can do it and will be ready for whomever they face in November.

It is possible that we are looking at a team with the same abilities that defined the 2007-2010 area where New Zealand achieved outstanding results way above their perceived potential. Many of the team members have been under Hudson’s guidance since 2015 and have all developed together. That being said, the team has yet to display the same edge that defined the 2009-2010 side.

Against the top playing nations of the world, Hudson’s team has yet to show that they are capable of pulling of big wins. While they may have a bit more attacking potential compared to the 2010 squad, they seem to lack the ironclad defence that created the opportunities to compete on an international standard. In the Confederations cup, the All Whites gave away crucial scoring opportunities and were vulnerable when opposing teams sent attacks down the flanks. Come November, the same mistakes could be costly.