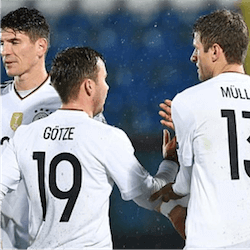 Last year’s FIFA Confederations Cup champions Germany took part in their first match of this year’s event. They faced off against a reeling Australian team, defeating them 3-2.

The mood in the German team is definitely positive after the decisive victory and they will be moving on to their next encounter with their heads held high.

Australia mounted a solid defence in the game’s first five minutes until German player Lars Stindl scored the first goal after being on the receiving end of a long cross by Julian Brandt.

Once the floodgates were opened, Germany continued their attack on the Socceroos with a goal attempt by Sandro Wagner fortunately going wide 25 minutes into the first half. There were precious few opportunities to capitalise on for Australia who hung on tight against the German onslaught.

Tom Rogic scored the equaliser for Australia just before half time. Unfortunately not before they conceded a penalty after a suspicious tackle on Leon Goretzka. This conceded a second goal to Germany thanks to the impressive on the spot conversion by Julian Draxler.

A More Aggressive Second Half

Only three minutes into the second half Australia’s fate was sealed after Goretzka received a cross from Joshua Kimmich to score Germany’s third goal.

Australia did fight valiantly and their effort was rewarded with a perfectly timed goal in the 56th minute thanks to a free kick taken advantage of by Tomi Juric.

In the 80th minute Australia attempted one last heroic push from acting Captain Tomi Juric, but unfortunately Bernd Leno was not allowing any capitalisation and expertly defended the goal attempt.

Germany has shown that they still have the form that took them to the finals last year. With their first opening match showing how strong the team still is and how well they work as a unit, it may be no surprise if they once again push all the way to the finals. The only risk now is that they enter their next match too confident and make some costly mistakes.

Meanwhile FIFA has demonstrated how serious their new crowd monitoring policy is after their disciplinary committee warned Mexico on the conduct of their fans in their opening match against Portugal.

FIFA has taken a very serious anti discriminatory chant policy and they have warned teams that they will be held accountable for their fans behaviour during games.