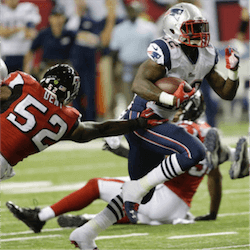 After 17 weeks of the regular season and three weeks of playoffs, New Zealand’s dedicated American football fans are finally within sight of the pinnacle of the 2016-17 gridiron season: the 51st Super Bowl, to be played in Houston, Texas at the NRG Stadium on February 05. The NFC and AFC Championships were both held on Sunday, and when the dust settled, the Atlanta Falcons were through to meet the New England Patriots in Super Bowl LI.

The NFC Championship was the first game played, with the Falcons facing the Green Bay Packers in Atlanta’s Georgia Dome. Many punters favoured the Wisconsin team, following their magnificent upset win over the NFC’s top-seeded Dallas Cowboys during an eight-game winning streak.

Instead, it was the home-team fans who went home happy, after a blazing performance by Atlanta quarterback Matt Ryan, who threw 392 yards and four touchdowns, one of which he ran in himself. Understandably, he had the fans chanting “MVP!” as he took the Packers apart, ably assisted by Julio Jones, who made 180 yards, took nine catches and scored two touchdowns. The final score was 44-21 to the Falcons.

The AFC Championship featured the Pittsburgh Steelers against the New England Patriots, who have been Super Bowl favourites throughout the season, at the Gillette Stadium in Foxburgh, Massachussetts. The Patriots didn’t disappoint their fans, even thought the Steelers were on top for two quarters, winning the second 9-7 and the fourth 8-3. However, the Patriots were 10-0 in the first quarter and 16-0 in the third, for a 36-17 score overall.

As expected, quarterback Tom Brady had an awesome night, shredding the Steelers’ defence and completing 32 of 42 passes. He also finished with a franchise post-season record 384 yards and three touchdowns. The win extended the Patriots’ latest winning streak to nine games, and sent them to the Super Bowl for a record ninth time.

The Falcons, on the other hand, have only appeared at the Super Bowl once before in the team’s 51-year history, 18 years ago, and they have never won it. So the Patriots will no doubt be favourites with the punters in the Lone Star State on February 05, but the underdogs will have everything to prove, and nothing to lose.