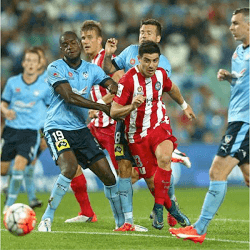 Some volatile football was only to be expected in the A-League match between Sydney FC and Melbourne City last week. It was the two rivals’ second game against each other in 10 days, and Sydney were keen to avenge the hard-fought 1-0 defeat Melbourne had inflicted on them in the FFA Cup Final, so fireworks were always on the cards.

However, despite the Sky Blues’ dangerous penetration of City’s defence in the first half and the excitement of a goal disallowed, a penalty waved off and a red card during the course of the match, Sydney had to be content with rescuing a draw from a 1-0 deficit at half time. The result nevertheless leaves them undefeated in 10 matches in the A-League, and still six points clear of City at the top of the tournament log.

Sydney Behind at Half Time

There was plenty of drama for the 14,688 fans at Sydney’s Olympic stadium, including what would have been a brilliant opening goal from Sydney’s Rhyan Grant, if it hadn’t clipped Bobo’s hip in the offside position on its way into the net. Home fans were unhappy about the disallowed goal, but were even less impressed when Fernando Brandan put away a brilliant shot to give City first blood. Brandan’s screamer had been superbly set up by fellow Argentinian Nicolas Colazo, who minutes earlier had seen his own magnificent free kick beat Sky Blues goalkeeper Danny Vulovic, only to rebound off the post.

Sydney’s desperation to secure the equaliser led to a combustible atmosphere in the second half, including Sydney coach Graham Arnold fulminating against the ref for denied penalties. The aggro culminated in a red card for Josh Brillante, after a second yellow for late challenges on City’s Neil Kilkenny, 20 minutes from full time.

Despite being down to 10 men, the Sky Blues got out of jail when a shirt-grab on Bobo by City’s Jakobsen resulted in a soft penalty. Bobo slotted the equaliser, and the scores remained tied until full-time. It’s not the result Sydney wanted, but it still leaves them excellently placed in the competition.