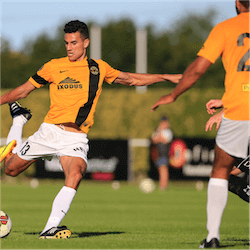 Team Wellington Through to Premiership Final

Team Wellington have managed to book their spot in the 2017 Stirling Sports Premiership final after defeating Waitakere United in one of the most bizarre premiership games to date. The ridiculously goal-rich game ended at four-all after regular time. After extra time, the teams will still locked at six goals apiece. Finally, the match came down to a penalty shootout where Niko Kirwan struck the winning penalty to take Team Wellington to their second final in two years.

At the start of the match, no one would have predicted the match would end up in such a state; especially considering how sedate the opening stages seemed at the time. After 33 minutes of ball passing and near-misses, Pascal Reinhardt finally opened the scoring for Waitakere. Team Wellington managed to get the equaliser on half time with Justin Gulley doing the honours.

The second half had barely even begun when Reinhardt slotted in his second goal to give Waitakere a 2-1 lead. It seemed Waitakere were running away with the match when Dan Morgan increased their lead to 3-1 after an inspired piece of play. If Wellington fans were feeling a bit down, it wasn’t for long as Nicolas Zambrano and Tom Jackson blitzed past the Waitakere defenders to even the score once again.

With ten minutes left on the clock, Morgan slotted home his second goal of the match to put Waitakere in the lead at 4-3. When Guillermo Moretti was sent off with a yellow card, it seemed all over for Team Wellington. Despite being one man down, Wellington refused to give up and were rewarded for their efforts with Jackson putting away a penalty to send the game into extra time.

The added time did nothing to separate the teams. The goals continued to flow with Dylan Stansfield putting Team Wellington ahead only for Joel Stevens to level things out once more. Wellington went ahead again in the dying stages with a cracking shot to make it 6-5. Reinhardt spoiled Wellington’s fun though, scoring his hat-trick and sending the game to a penalty shootout.

In the shootout, Wellington keeper Scott Basalaj made three saves with neither team able to take the lead. With Gully missing his chance and Scott Hilliar putting his over the bar, Kirwan had a chance to take it at sudden death. Kirwan calmly slotted his penalty home sending Wellington through the finals. Team Wellington will take on Auckland City in a re-match of the 2016 final, which saw Wellington, win their first title.