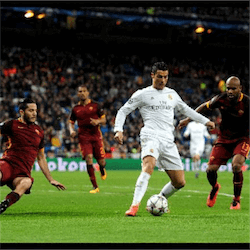 Friday saw the draw for the 2016-17 UEFA Champions League Quarter-Finals, the first leg of which is scheduled for 11 and 12 April. New Zealand football fans can look forward to a match between powerhouse teams, stuffed with international stars, on both days.

On Tuesday, 11 April, Juventus will be at home in Turin to FC Barcelona. The Italian side didn’t allow Porto a single goal in either of their Round of 16 legs, winning 2-0 and 1-0, and as the fifth-ranked club in the world, they will always pose a serious threat.

World No. 3 FC Barca, on the other hand, had the Camp Nou crowd on its feat, ecstatic, when they came back from a first leg 4-0 drubbing in Paris to beat Paris Saint-Germain 6-1 at home. As comebacks go, it made football history, so punters can expect this quarter-final to be closely matched and tenaciously fought.

World No. 1 side Real Madrid and No. 2 Bayern Munich are the giants meeting on Wednesday, 12 April. They play the first leg in Munich, and both are coming off victories in both legs of the Round of 16.

Real Madrid beat Napoli 3-1 both home and away, and Bayern had an even more impressive round. They slaughtered Arsenal 5-1 in both their legs, so their quarter-final games are likely to produce brilliant football, but could go either way.

Leicester City is the only English side left in the 2016-17 UEFA Champions League, but the quarter-final draw has left them a massive task. They face World No. 4 team Atletico Madrid in Spain in the first leg, on Wednesday, 12 April.

The English Premier League champions did not look as convincing as they should have in the Round of 16, losing the first leg 2-1 to Sevilla, before coming back 2-0 at home. Against a side as strong as Atletico Madrid, they could struggle.

The other first leg set for Tuesday, 11 April, is Dortmund hosting Monaco, with the German side looking the stronger. The second leg of the quarter-finals, with all the first-leg away sides now playing at home, will be played on 18 and 19 April.