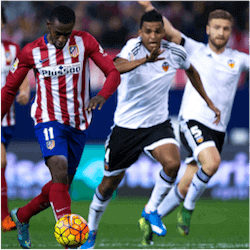 With the World Cup qualifying round behind them and the transfer window about to end, Spain’s La Liga players can get back to the task of club football this week. Friday starts the third round of the 2017-18 season with a clash between Leganes, offered at $1.10 by betting sites online, and $3.20 Getafe.

The match that might draw the most interest from Kiwi sports betting enthusiasts, however, is Valencia at home to Atletico Madrid on Saturday. On paper, and indeed, at online betting sites, Atletico is the favourite, at odds under $1.20, with Valencia offered at $2.75. The Madrid side lies fourth on the ladder after a win and a draw, four places above Valencia and 3 ahead on goal difference.

However, the match could be tighter than the odds suggest. After a 1-0 win over Las Palmas in their tournament opener, Valencia held defending champions and odds-on La Liga outright favourites Real Madrid to a 2-2 draw in Round 2. With Brazilian midfield talent Andreas Pereira, on loan from Manchester United, set to debut for them on Saturday, they could present a serious threat at home.

Atletico, on the other hand, while reassured by the re-signing of Argentinian manager Diego Simeone until 2020, will be smarting after failing to secure the transfer of Diego Costa back from Chelsea. They also looked iffy in their 2-2 draw against newly promoted Girona in their season opener, although they came back to thump Las Palmas 5-1 the next week. Saturday’s match will be the Madrid side’s third away game in a row.

Other La Liga Round 3 Fixtures

Real Madrid host Levante in Saturday’s first match, with the home side odds-on at less than $0.10 and Levante $50.00 outsiders. FC Sevilla are also odds-on favourites against Eibar at $5.50, and Barcelona is likewise heavily fancied against an $18.00 Espanyol.

Sunday brings punters Real Sociedad playing away to Deportiva La Coruna, in a clash that should be a lot closer than Sociedad’s current place atop the ladder and Deportiva’s position fifth from the bottom would suggest. Deportiva are priced at $2.00 and up, with the visitors at around $1.50.

In Sunday’s other three matches, Athletic Bilbao, Celta Vigo and Villarreal are all odds-on favourites at home to beat Girona, Alaves and Real Betis, respectively. On Monday, Malaga is at around even money to win at home against a $3.00 Las Palmas.