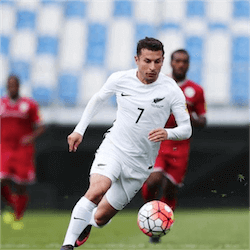 New Zealand football fans don’t have the chance to bet on the national team in a major international competition very often, but it looks like 2018 might be different. The All Whites have only qualified for the FIFA World Cup twice before in the tournament’s history: in 1982, and 2010.

However, back-to-back victories against Fiji in the third round of the OFC qualifiers have put the New Zealand side through to the two-leg OFC Finals in August and September, and a win there will see them through to the inter-confederation play-offs in November, which also consist of home and away legs.

At the inter-confederation play-offs, the winning OFC finalist will face the fifth-placed team in the South American football confederation, CONMEBOL, for a World Cup berth. So four consecutive victories is all it will take to see New Zealand included in the 2018 FIFA World Cup line-up.

The third round of the OFC World Cup qualifiers began in November last year, with New Zealand in Group A against New Caledonia and Fiji. The All Whites, under English head coach Anthony Hudson and captain Winston Reid, remain undefeated in all four matches, beating New Caledonia 2-0 at home and then drawing 0-0 away.

They beat Fiji 2-0 in Lautoka on 25 March, with goals from Chris Wood and Marco Rojas. At home in Wellington on 28 March, they repeated the 2-0 win, with both goals coming from Ryan Thomas. Even though Fiji and New Caledonia still have two matches to play in June, the All Whites have an unassailable 9-point lead on the ladder, so their place in the OFC Finals is assured.

Group B in the OFC qualifiers comprises Tahiti, Solomon Islands and Papua New Guinea. At the time of writing, Tahiti have beaten both opponents once, topping the table with six points, and need a home win against PNG to put them through to the OFC Finals.

However, Solomon Islands have also beaten Tahiti once, so if they can defeat PNG twice in two final legs in June, they could also remain in contention. Whichever side tops Group B, however, New Zealand football fans have every reason to be confident their side can win the OFC Finals in August and September.