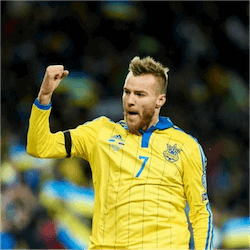 Player Of The Season For Vyscha League

Andriy Yarmolenko was voted player of the season second year in a row for the Ukraine Vyscha League. He was awarded the distinction thanks to his 15 goals and 18 assists during the past season.

The Ukrainian forward plays for the club Dynamo Kyiv but he also plays for the National team. He has represented his country on the international stage since 2009, appearing in the 2012 UEFA Euro Cup and the 2016 Euro Cup.

He recently played in this capacity against Malta in a friendly this week. In a surprise victory, Malta walked away with the win for a 1-0 finisher. This was Malta’s first win in since their victory in 2013 against the Faroe Islands.

15 minutes into the first half of the match, Malta’s Alex Muscat kicked a long ball down the field to waiting forward, Zach Muscat he slammed in a beautiful header, putting Malta in the lead.

Despite regular challenges, Ukraine simply could not get together enough momentum to take back the lead from a defensive Malta. Alex Muscat kept the pressure on in the attacking front, almost making another scoring pass to team mate Effiong who unfortunately booted it wide.

Ukraine pushed another challenge in the 40th minute of the game but a careless pass to Viktor Kovalenko was quickly intercepted and stolen by forward, Andrew Hogg.

Yarmolenko is also a big fan favourite thanks to his much reported rivalry with Taras Stepenko from Shakhtar Donetsk. Yarmolenko committed a dangerous tackle in an early match that nearly seriously injured Taras.

The two players appeared to exchange pleasantries as well as jerseys after the game. In a following press conference Yarmolnko threw Taras’s jersey on the ground. In an April match between Yarmolenko’s Dynamos and Tara’s Shakhtar Donetsk, the two players physically engaged each other on the field.

A Much Celebrated Player

Other accomplishments by the celebrated player is his record for the fastest goal ever scored by a Ukrainian player at 14 seconds into a friendly against Uruguay. Following this appearance, Yarmolenko scored a hat-trick of goals when Ukraine faced Luxemburg at the 2016 UEFA qualifiers. The match ended 3-0, with all goals scored by Yarmolenko.

His inclusion in the 2016 Euro Cup however did not help Ukraine at all as they finished goalless and at the bottom of the group. The celebrated player will be enjoying his second award and he will be a force to be reckoned with in the Ukraine Vyscha League for some time yet.