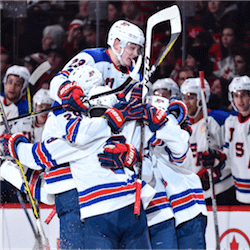 Ice-hockey fans getting ready for the start of the 2018 World Junior Ice Hockey Championships on Boxing Day were treated to a pummeling of note in one of the pre-tournament exhibition games on Wednesday night. The junior Canada team handed their Czech Republic opponents a 9-0 whitewash at the Budweiser Gardens arena in London, Ontario.

The Canadians owe a massive part of their victory to goalkeeper Carter Hart, who made 23 saves to shut out the Czechs completely. He’s almost certain to be in the net when the team opens their 2018 junior championships campaign against Finland at the KeyBank Center in Buffalo, New York on December 26.

Foremost in the Canucks’ attack were Taylor Raddysh, who scored a brace, and Robert Thomas, who put one of his own in the net in the first period, assisted by Raddysh. Thomas then returned the favour in the third period, with a cross-crease shot that set Raddysh up for his first goal. He scored his second off the power play just 27 seconds later.

Czech Republic keeper Jakub Skarek did stop 25 of the 36 shots Canada directed at his net, backed up by Josef Korenar, who deflected two more, so the scoreline could have looked a lot worse. It was their attack that let the Czechs down; they came close to scoring only once in all three periods.

It’s a flaw they’ll need to sort out before they open their 2018 World Junior Ice Hockey Championships against Russia at the KeyBank Center, in the opening match of the tournament. Skarek is likely to be in the net again.

Between Czech Republic vs Russia and Canada vs Finland, the KeyBank Center hosts a third match on Boxing Day: Denmark vs USA. The fourth game of opening day, Belarus vs Sweden, takes place at Buffalo’s Harbor Center.

Raddysh and Thomas appear to have subime chemistry as linemates on the national junior team, despite being rivals in the Ontario Hockey League: Thomas plays for the London Knights and Raddysh for the Erie Otters. Wednesday night’s display bodes well for the Canada juniors as they head into the world championships.