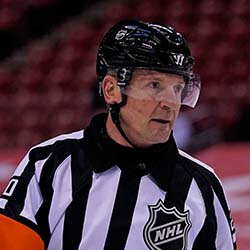 Veteran referee Tim Peel, who refereed more than 1300 NHL and over 90 Stanley Cup play-off games during what would have been considered an illustrious run, has self-sabotaged his career.

His career is over after his voice was detected by a TV microphone in an embarrassing hot-mic incident that revealed him saying how he wanted to call an early penalty against the Nashville Predators. The league has since announced that Peel will no longer refereeing NHL games – not now or at any point in the future.

NHL vice president of hockey operations, Colin Campbell, on Wednesday issued a formal statement confirming the now-disgraced Peel’s fate, explaining that the referee’s conduct had been the exact opposite of what the league expected from its officials – and of everybody else associated with the game. Campbell said there was no justification for what Peel had said, no matter his actual intentions or the context in which he had made the controversial comment.

The game that Peel and fellow-ref Kelly Sutherland had been working at the time resulted in the Predators being called for a total of four penalties as opposed to the Detroit Red Wings’ three.

What made the entire incident even more bizarre, is that Peel’s comment was clearly made to Nashville’s Filip Forsberg, as later admitted to by him (Peel).

What Peel had done is considered a “make-up call”, and something many regard to be a regular part of many NHL referees’ thinking process regarding the fair calling of a game. But calling a game fairly should not have to involve doing anything of the sort, said Edmonton’s Adam Larsson in response to Peel’s dismissal.