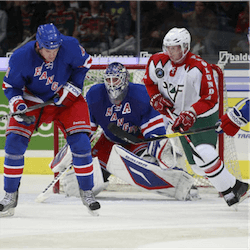 Tuesday and Wednesday will bring Kiwi ice hockey fans the final group-stage matches in the 2017-18 European Champions Hockey League. Online sports betting fans with a weakness for Cinderella stories will be watching to see how UK team the Nottingham Panthers fares against TPS Turku on Tuesday night, although it’s a match that matters far more to the Turkish side.

The Panthers, with a game in hand, have already secured their first-ever berth in the Round of 16 playoffs. That’s thanks to three wins and one win-in-overtime from five games, leaving them atop the Group F ladder with an unbeatable 11 points.

TPS Turku, at the bottom of the ladder, is on 6 points, as are SC Bern, although they lie in third place on goals scored. Second place in Group F is held by Czech club Mountfield HK, on 7 points. So both the Panthers-Turku and Bern-Mountfield games on Tuesday could have a bearing on the team that joins the Panthers in the playoffs.

In Groups A and H respectively, Finnish team Tappara is on 15 points and Sweden’s Frolunda HC has 14. So both are equally uncatchable at the top of their groups and assured of a place in the playoffs. The two sides are also neck-and-neck at the top of the betting to win the tournament outright, with online sites offering Tappara at $4.00 and above, and Frolunda’s odds starting at $5.00.

Despite their early success in the group stages, Nottingham are still outsiders, ranked 22nd in the outright betting at odds ranging from $66.00 to $100.00. Those odds may shorten if the Panthers pull off another convincing win against Turku on Tuesday, however. So punters who fancy the British team to go all the way this year should put their money where their mouths are soon, if they want to get attractive odds.