Silver Ferns Go Down to Australia in Constellation Cup Opener 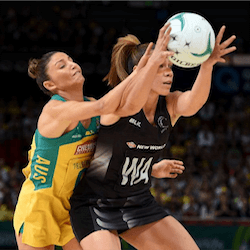 The Silver Ferns have gone down to the Australian Diamonds in the netball Constellation Cup Series opener. With the game hanging in the balance for most of the second half, the possibility of a win for the Ferns was always on the cards. The team now finds themselves 1-0 with three tests left to play. As it stands, New Zealand has lost 8 out of 9 games against Australia on home soil. If they want to stand any chance of winning the series, they need to change the game plan.

As for Thursday’s match, the Australian Diamonds quickly built up a lead, going four goals up by the end of the first quarter. This was the where the margin stayed for most of the match as the Ferns were able to reel them in as soon as they pulled away. By the time the final period got underway, the goal difference was still at four until the Ferns finally upped their defence and got within a single goal.

However, that was as close as it got. It was a very physical match with the Ferns racking up a total of 76 penalties while the Diamonds posted 70 of their own. Speaking to the press, Ferns Captain Katrina Grant said that the intensity of the match was far greater than their match in Invercargill where they beat the Diamonds 57-47.

Mixing Up the Defence

One of the key aspects of their win there was the defence work done by Kelly Jury. With Jury benched in Auckland, Australia’s Caitlin Basset was given free rein to score a total of 39 goals from 43 attempts. At the same time, the Ferns relied heavily on Baily Mes when they found themselves on the attacking end of the court. Swapping out with Maria Tutaia in the second quarter didn’t improve things. It was only in the final quarter that Tutaia’s shooting started paying off.

With the Ferns down by eight at the break, Southby switched things up in the defence, bringing in Kayla Cullen at wing and Temalisi Fakahokotau for goal duty. This gave the team a defensive kick-start, allowing Fakahokotau to make some big plays down the court. Looking ahead to their second match of the series in this Sunday, the Ferns will want to build on their final quarter performance. Had they been playing like that for most of the game, it would have been a very different outcome.