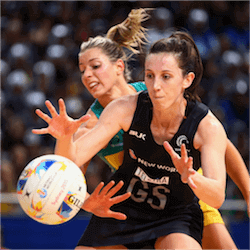 New Zealand’s Silver Ferns on Wednesday night powered successfully through a slow and sluggish first half and all the way to a superior start to the current Cadbury Series.

The first half initially seemed to set the stage for a convincing New Zealand A win, but lucky for the national side, a fantastic third quarter paved the way for the eventual 59-44 victory in the opening game of the series played on Wednesday in Palmerston North.

The series features the Silver Ferns, New Zealand A, the New Zealand Men, and also the New Zealand under-21 side – serving as a warmer-upper for the national side before taking on England in Hamilton next week. The stand-off against England will be decided by a three-test series format.

The Ferns will without a doubt want to focus on correcting their slow start played in Wednesday night’s game against New Zealand ahead of the test against England. Initial hit-outs were very much a mixed bag of performances too – not to mention a general lack of teamwork and cohesiveness seen prevailing all throughout the first 30 minutes of the game.

The Kiwi A side were obviously determined to make their mark – especially since their coach made a big deal out of emphasising the England selection door for next week’s series being far from shuttered. They certainly made a good go of it too, with New Zealand A leading from the front during the initial stages of the game.

Both teams regularly rotated their players in view of the effective management of workloads spaced out across four games being played within as many days.