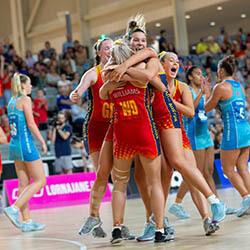 The coronavirus COVID-19 pandemic has seen the top-flight sports scene in New Zealand laid bare after the Domestic Netball Championship got postponed for two weeks. This was the only professional competition still in place in the country but the halt to play has now been announced, with the earliest possible return target date set for April.

The games’ opening rounds were completed and the second and third ones will be put back into place after the new governmental edict banning mass indoor gatherings of 100+ people gets rescinded.

Now every single top-level sport in New Zealand has had its events cancelled outright or postponed, along with almost all community sports.

All Six Nations games have been postponed and Super Rugby events have also all been called off. There is no indication as to when they’ll return. But NZ Rugby is hoping to create a competition limited to domestic teams only for its five Super Rugby squads to fill the void left by the main competition being suspended indefinitely.

In related news, the NZ Warriors and Wellington Phoenix are currently basing themselves in Australia to stay in the NRL and A-League contests, respectively. The NZ National Basketball League has made it compulsory for all players and members of team management to self-isolate for two weeks after arriving from overseas, and the final two One Day Internationals that the Black Caps had scheduled in Australia were cancelled, along with the Australian Twenty20 Series set to unfold here later this month.