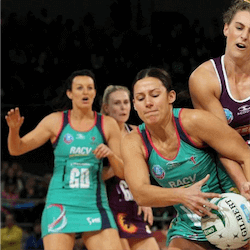 The head coach of the Melbourne Vixens, Simone McKinnis, has stated that she is currently in full team training mode for the Suncorp Super Netball match against the Giants.

The Giants are only 3 points behind the Vixens in the Suncorp standings. The Vixens are currently at the top of the log, barely ahead of the Sunshine Coast Lightning.

The Vixens are facing the Giants this coming Saturday in the preliminary finals. The upcoming match is in the aftermath of a loss to the previously mentioned Sunshine Coast Lightning last weekend.

Giants Are Ready For Attack

The Giants are coming off a very close one goal victory against the Collingwood Magpies who were in stunning form. The Magpies are currently ranked fourth on the Suncorp Super Netball rankings with 18 points total.

The Vixens will also be facing a new Giants team setup after Susan Pettit moved to wing and Kristina Brice took in the goal shooter position.

McKinnis stated that while the Giants attack is fearsome, her team will hold up against the assault to come out on top.

This has been a strength of the giants in recent matches, their flexibility and adaptability has allowed them to suddenly come out of left field and leave coaches scratching their heads.

The strong Vixens performance in the league so far makes them the favourites for this series but if there is any team that can derail their momentum, it will be the Giants.

The Driver For Victory

McKinnin believes that the bad taste left in the Vixen’s mouths after last week’s defeat will be the fuel for their victory this Saturday at Hisense Arena. The last time these two powerhouses faced each other, the Giants snatched the victory by 4 goals.

McKinnin has said that what the team currently is focussing on is consistency, which will definitely be what they will need in buckets if they are to walk away the victors this weekend.

The Rest Of The Field

The top four teams in the Super Netball League have a commanding lead over the rest of the competitors.

Outside the top 4, the Queensland Firebirds are at 5th place with 15 points. At 6th position is the New South Wales Swifts with 7 points, the West Coast Fever at 7th place with 4 points and at the bottom of the league is the Adelaide Thunderbirds with 2 points.