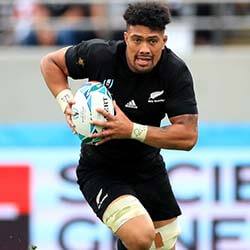 Ardie Savea, Hurricanes’ stalwart and All Blacks lose forward, will be off-contract with New Zealand Rugby at the end of this year and is yet to disclose what his plans for the future are. The question on everybody’s lips is, will he stick around or take his talent elsewhere?

He is still recovering from a medial collateral ligament injury on his left knee and is still working on improving his return to the game. This is a core focus for the 27-year-old rugby star, which further explains why he is yet to announce plans for the future.

Currently, he is still very much focused on leading his team to victory against the Reds. He wants to stay present at the moment and give his team the attention they deserve. He has, however, mentioned that he will be making a decision about his career in the coming weeks.

Savea has mentioned previously that he wants to test his skill elsewhere and has even toyed with the idea of NRL. He’s also joked about a contract in Europe; however, nothing has been confirmed yet.

The common theme in everything that he has said to date about his future indicates that he wants to take his talent to the international stage. The only question now is, will he make the move or stick it out locally for the time being? In the meantime, New Zealand rugby fans can still watch him play his heart out until the end of the season.