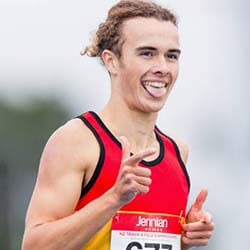 Kiwi runner Sam Tanner recently ran the race of his life in New York when he went on to not only break fellow New Zealander Nick Willis’ 1500 metres indoor record at the New Balance Indoor Grand Prix in New York, but also secured his spot at the starting blocks in Tokyo.

Tanner spoke to a local broadcaster from New York after Saturday’s meet, saying he was over the moon with happiness at his performance, especially since he’d worked extremely hard at qualifying for the 2021 Tokyo Olympic Games. Tanner and Australian Oliver Hoare on Saturday became the first Oceania runners ever to pip the 3:35-mark. The Australian finished the winner of Saturday’s meet.

The young Kiwi, a sophomore at Washington University, said finishing the race alongside mentor and hero Nick Willis had made his achievement only all the more special on a personal note. He said since he’s now beaten his hero twice while running in the same race as Willis, he assumed the key to beating all his (Willis’) times was simply to keep his mentor running.

Willis, a two-time Olympic medallist, finished seventh in the weekend’s race. The 37-year-old tweeted his excitement about Tanner after the race, saying he believed New Zealand’s middle distance future to be in superb hands indeed.