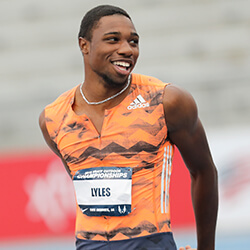 Noah Lyles became the fourth fastest 200m ever after he won the Diamond League event that took place in Lausanne with a time of 19.50 seconds. The 21 year old’s time has only been beaten by American Michael Johnson, Yohan Blake, and current world record holder Usain Bolt, who is also from Jamaica.

Lyles also holds the title of the second fastest 100m this year with 9.86 seconds, ran the fastest 200m race since Bolt claimed Olympic gold during the London 2021 Olympics. Justin Gatlin won the 100m in 9.92 seconds. The 37-year-old world champion was one of six Americans to attend to the race, and beat compatriot Michael Rodgers into second, with Aaron Brown of Canada finishing in third place.

Talking about his win, Lyles said that it was all about his plan, and that him and his coach had been working on making sure that he was as fast as possible.

British Dian Asher-Smith clocked a best for the season with 10.91 seconds for the women’s 100m, but finished in second place behind Shelly-Ann Fraser-Pryce, from Jamaica, and who is also a double Olympic champion. 23-year-old Asher-Smith finished ahead of Ivorian Marie-Josee Ta Lou and Dafne Schippers of the Netherlands, who had won silver and gold respectively during the 2017 World Championships.

Bahrain’s Salwa Eid Naser made four 400m wins from as many Diamond League event so far this way, but was ultimately pushed out of the way this year by Niger’s Aminatou Seyni.