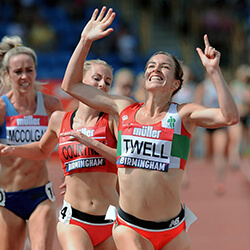 British Steph Twell beat European champion Lonah Chemtai Salpeter to claim the European 10000m Cup in London while Italian Yemaneberhan Crippa took first place for the men’s race. The event was held as part of the Night of the 10000m Bps tournament that too place at Parliament Hill track, and there were hundreds of spectators present to watch the athletes duke it out for the ultimate prize. Along with the main racing events, fans were able to enjoy the festive atmosphere.

In the women’s race, defending champion Salpeter has set off of the line at a fast pace, and had built up a big lead by the time she passed the 3000m mark, which was seven seconds ahead of the pack, which included Eilish McColgan, Liv Westphal of France, and Iris Fionnuaia McCormack.

Salpeter had maintained her lead halfway through the race, while Westphal and McCormack started to lose pace at the back of the pack. Twell and McColgan gradually began to eat away at the Lead’s gap, and closed in on the Israeli runner with each lap, with Twell eventually catching up toward the final lap, and pulling across the finish line with a time of 31:08.13.

On the men’s side of the race, Crippa had been part of the lead pack throughout. Once the pacemakers had begun to drop out, Crippa shared the front with Soufiane Bouchikhi, but sprinted ahead in the final lap and finished off the event with a time of 27:49.79.