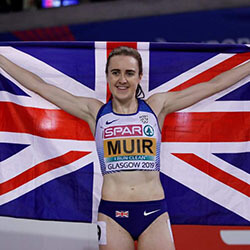 Laura Muir has completed a second successive European Indoors double while Shelayna Oskan-Clarke won gold for the 800m for an extremely successful final day for Britain in Glasgow. Scotland’s 3000m champion Muir dominated the 1500m, repeating her achievement while in Belgrade in 2017.

Oskan-Clarke led the entire way to take the title for the 800m. It was risky display by the 2017 silver winner, who decided to hold off on a late challenge from French Renelle Lamote. There were also silver medals won for Britain’s Jamie Webb for the 800m, Holly Bradshaw in the pole vault, as well as Tim Duckworth in the heptathlon along with the women’s 4×400m quartet.

Great Britain also finished second place on the medal table just behind Poland, completing the tournament with 4 golds and 12 medals in total – their best ever results at the championships.

Although there wasn’t a need for Muir to dominate the finish as she did in the 3000m, she decided to leave her opponents in the dust for the last 300m. The 25 year old, who was born in Inverness, led from the start of the race, and cross the finish line in four minutes and 05.92 seconds. Polish Sofia Ennaoui finished four seconds behind, while Irish Ciara Mageean claimed a bronze for herself. Muir told reporters after the event that she was so relieved as there was a lot of pressure on her, adding that so much hard work goes into preparation.