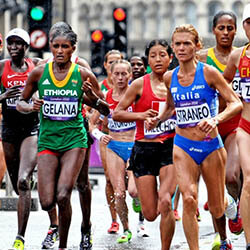 Organisers at the International Olympic Committee have voiced their concern over the expected high temperatures for the upcoming Olympic Games, and have set a plan in motion to move the 2020 Olympic marathon 800 kilometres north in order to find safer race conditions. They recently detailed a new plan to stage the marathons and race walking events in Sapporo, which was the host city of the 1972 Winter Olympics, and hope that doing so will see the runners facing significantly lower temperatures during the event.

The new proposal comes some weeks after marathons were being run at midnight in 38-degree heat at the track and field world championships that took place in Doha, Qatar. Forecasted temperatures in Sapporo are five to six degrees centigrade less than Tokyo during the day, according tot he Olympic body. They added that the Olympic Games are a platform where athletes are able to give a once in lifetime performance, and the plans set in place are meant to give them the best conditions possible.

An Olympic panel has since been consulting with the sports governing bodies while assessing weather and heat issues for the Tokyo games, which are to take place in August. The marathons were already due to start at 6 in the morning in order to avoid the head as much as possible, with the men’s 50 kilometre race walk final being set for a 5:30 start. The IOC has informed the governing body and other officials about the plans.