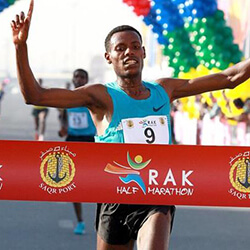 Ethiopian Lelisa Desisa and Kenyan Mary Keitany have won the their respective Men’s and Women’s division racing at the 2018 TCS New York City Marathon, with Desisa earning his first win at the event at a time of 2:05:59.

Desisa managed to hold off fellow countryman Shura Kitata by 1.99 seconds, while last year’s victor, Kenyan Geoffrey Kamworor took the third place. Desisa had also won at the Boston Marathon in both 2013 and 205, and came in second place at New Work in 2014, while claiming third place in 2015 and 2017.

Keitany, who finished with a time of 2:22:48, has become the second female in history to win four New York City Marathons. She managed to also beat countrywoman Vivian Cheruiyot by 3 minutes and 13 seconds, while American Shalane Flanagan, the winner from last year, came in at third place. Keitany’s time was also marked as the second-fastest time in history at the event, after Margaret Okayo of Kenya who set the record in 2003 of 2:22:31.

The race began with more than 50000 participants, with four winners from last year taking part in the event.