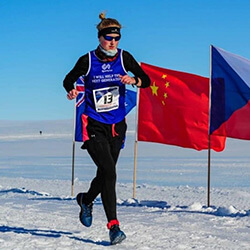 Gill completed the 295 km event in a world record time of 24 hours and 19 minutes, and was burning 5000 calories per day of running. After she finished, Gill told reporters that it was a crazy ambition that she wanted to do, and that the challenge was irresistible to her. She added that a decade prior, she wanted to get fit and participate in the Landon Marathon, but now she’s taking part in marathons that are taking her around the world.

Over the last ten years, Gill has completed a total of 45 marathons, including 10 London Marathons, with her fastest time finished at 2 hours and 58 minutes. American Mike Wardian won the men’s title after he completed the final marathon in Miami, and claimed a total running time of 20 hours and 49 minutes over the seven races.

Gill came second in the first marathon that took place in Antarctica, but went on to win each of the remaining events, which were all the standard 42.2 km in length as she ran her way to overall victory. She then moved on to Cape Town, South Africa. She later went to Perth, Western Australia, where she ran in temperatures of 35 degrees Celsius. Fewer than 200 athletes have ever completed the 777 challenge since it was first started in 2003.