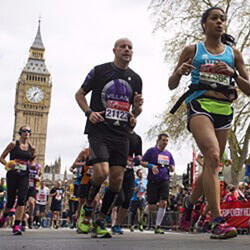 As the London Marathon event is soon to be underway, officials have sent out a warning to all participants regarding the temperatures and the resulting precautions that they need to take. 50000 runners are predicted to take part, and officials have asked that they take the race slower than usual to compensate for the heat they will be facing.

Temperatures for the event are forecast to be around 23 degrees Celsius at their peak on Sunday afternoon, beating the previous highs of 22.2 degrees Celsius that occurred in both 1996 and 2007. Organisers of the event have also ordered thousands more water bottles to be distributed to runners throughout the course of the day.

Professor Sanjay Sharmer, the official London Marathon medical doctor, has sent emails to all those running on the day, warning, “Listen to your body. If you feel thirsty, drink water. If you feel overly tired, slow down. If you feel unwell in any way, visit one of the 39 first aid stations on the course.”

Organisers have also asked that all runners follow the rule of “Four Ds”, which states: Drink water, douse it over the hear and back of the neck, drain the bottle by squeezing out any liquid, and drop it for the recycling team to collect.

Race director, Hugh Brasher, has stated that runners must remember that they do not have to keep going if they aren’t feeling up to it, and there isn’t any valour in keeping going in the hot weather.