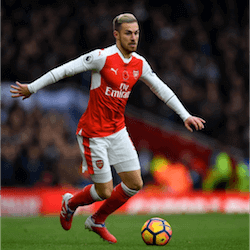 To say that Aaron Ramsey had a big game on Saturday is a bit of an understatement. Ramsey scored his first career hat trick and led Arsenal to an inspiring 5-1 win over Everton at the Emirates Stadium. Within the first 20 minutes, Ramsey found the back of the net twice, once before and once after a headed goal from Laurent Koscielny in the 14th minute.

Arsenal’s club record signing, Pierre-Emerick Aubameyang also produced the goods on his first day out. While it was hotly debated whether he was offside, Aubameyang made it 4-0 for the Gunners with a clever chip over the keeper in the 37th minute. Being 4 down at half time is a position no team wants to be in. All credit to Everton as they did manage to pull themselves together and put in a worthwhile performance in the second half.

It took another 24 minutes of play before any action was seen again, this time through substitute Dominic Calvert-Lewin who found Everton’s consolation goal, much to the delight of weeping Everton fans. The euphoria was short lived though as Ramsey completed his hat-trick 10 minutes later off yet another assist from Henrikh Mkhitaryan.

A Perfect Response For Arsenal

Arsenal’s performance was a perfect response to their midweek defeat at the hands of Swansea. The side took a bit of flak from supporters and the press with comments that the Gunners defence was weak. This time it was Everton who struggled with their defence. The first half in particular was a shocking display of poor defensive strategy as the back 3 were regularly caught out of position.

After scoring in the 6th minute, Ramsey was given far too much space to take on a deflected shot. The result, yet another goal in the 19th minute. Theo Walcott had a go for Everton but was denied by Mustafi with a brilliant block. Aubameyang also had a chance to score early on but had his efforts denied by Jordan Pickford. A few minutes later, he was on the hunt again, this time getting a quick chip over the keeper’s head to impress the fans.

The Gunners did drop their level of play after the break though. This gave Everton the time and the space to find their feet with Oumar Niasse striking the post from a Walcott cross. It was only Calvert-Lewis who managed to convert though, taking the score to 4-1 in the 64th before Mkhitaryan got hold of the ball again and set up another beauty for Ramsey.