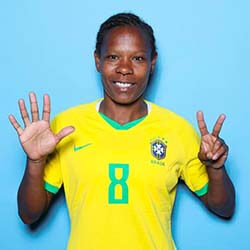 Star midfielder Formiga, who is Brazil’s most capped player with 233 games, has announced that she’ll be retiring later this month. The 43-year-old competed in an impressive 7 World Cups and as many Olympic Games during her illustrious football career.

Formiga’s final game will be against India on November 25.

Born Miraildes Maciel Mota, Formiga made her debut for Brazil as a young 17-year-old in the 1995 World Cup. She then went on to compete in every Olympic Games since women’s football was declared an Olympic sport in 1996.

Her participation in July’s Tokyo Games meant she became the first female player ever to compete in 7 Olympic Games. Her participation also made of her the oldest player to play at the Women’s Olympic Football tournament.

Formiga played her last World Cup in 2019, when Brazil lost to France in the round of 16. She also formed part of the Brazil squad that lost to Germany in the World Cup final of 2007.

Formiga hails from the northeastern city of Salvador. At the time of her birth in 1978, it was illegal for women to play football in Brazil. The sport was at the time considered “incompatible” with the “female nature”. The archaic 1941 law was finally repealed in 1979.

In addition to her Olympic Games record, she also holds the accolade for the oldest goal-scorer in a World Cup tournament.