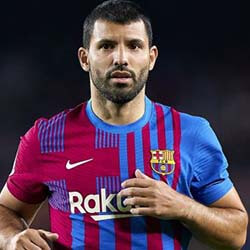 Former top Manchester City goal scorer Sergio Aguero, who recently joined Barcelona as free agent, is expected to announce his retirement from professional football on Wednesday. The super striker is reportedly suffering from a heart condition.

Aguero experienced severe chest pains and breathing difficulties during Barcelona’s 1-1 draw with Alaves on Oct. 30. The star scorer fell to the turf while holding onto his chest at Camp Nou. A medical team could be seen treating him for several minutes on the field before Aguero had been able to make his way off unaided.

The former City star was reportedly shortly after admitted to a local hospital where several cardiological tests had been performed. Barcelona later released a statement voicing the expectation that Aguero would be away from the game for at least three months in order to allow for the diagnostic and treatment process to run its course.

Sadly, however, as a result of his heart condition, Aguero will not be able to continue his prestigious 18-year-career.

His football journey began at Independiente, where his inclusion saw him becoming Argentina’s youngest ever top-flight addition. After only three years with Independiente, he would move on to Atletico Madrid in 2006. He ended up signing with Manchester City in 2011.

Aguero’s biggest moment of his career came when at the end of his first season with City, his 94th-minute goal snatched the top spot away from Man-U – and gave his team its first title since 1968.