Arsenal Rise To 7th With Win Over West Brom 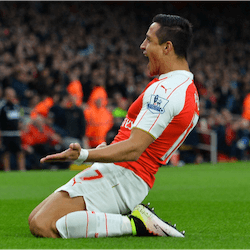 Arsenal have won their third straight premier League victory with a 2-0 win over West Brom at the Emirates Stadium. Alexandre Lacazette was the man of the day, scoring twice to add to his impressive tally since moving across to the Gunners. Lacazette scored the opener in the 20th minute with a brilliant header coming off an Alexis Sanchez free kick that bounced off the crossbar.

West Brom, quite rightly felt they deserved a penalty before the opening goal was even scored. Shkodran Mustafi played a slide tackle into Jay Rodriguez, bringing him down, but no foul was given. Thinking he had a decent shot at goal, Rodriguez chose to get up immediately but his shot was just edged onto the post by Petr Cech.

The penalty debacle continued after the break when Arsenal was awarded a spot-kick from an Allan Nyom barge. Lacazette stepped up and slotted the ball into the bottom right corner to mark his fourth goal for Arsenal since moving to the club for a record £46.5 million.

It wasn’t all plain sailing for Arsenal though. West Brom caused the Gunners problems throughout the match and it all came down to fouls and penalties in the end. The victory for Arsenal lift them up the table to seventh place, just one point behind Tottenham and six points behind Manchester City who are in the lead. Another loss for West Brom means they slip to 12th in the table.

West Brom Manager Tony Pulis has had a poor run at the Emirates Stadium. This was his 10th straight match he lost at the Stadium. Despite an impressive attacking display, West Brom have racked up five straight losses and have only one a single one of their 12 away league matches.

On the other side of the coin, Arsenal have won their past five games. Lacazette’s inspired performance must have been a huge relief for manager Arsene Wenger and a vindication for the side. Wenger also gave Sanchez a start for the second time this season following his non-start move to Manchester City. Sanchez proved to be instrumental in the game, providing the assist for Lacazette’s opening goal.

There have been doubts about Sanchez’s attitude after the failed move, but he proved his worth in both this match and the Liverpool match where Arsenal cleaned up with a 4-0 win. He was giving a standing ovation by the home crowd when he was substituted off, showing that he still has plenty of support the fans.