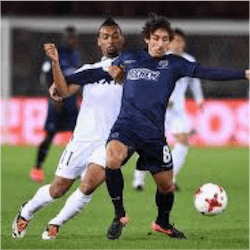 Making their seventh appearance at the FIFA Club World Cup, Auckland City were handed a bitter pill to swallow after they went down 1-0 to Al Jazira on Thursday morning. It is the kind of loss that may take months to get over as they should have, by all rights walked away victorious. It is no exaggeration to say that Auckland City dominated the UAE champions. They were superior in just about every aspect of the game and somehow still managed to lose.

The players knew it, the fans knew it and even the Al Jazira coach, Hen ten Cate said after the match that Auckland City were the better side, but sometimes, the better side just doesn’t win. Auckland City have been playing at the Club World Cup for just under a decade and have produced some brilliant moments. However, it all pales in comparison to the number of chances they had in this one match.

Never before has Auckland had so many opportunities to score on the world stage. To put it into perspective, the Sandringham-based club had a total of 17 shots at goal, with seven of them, coming dead on target. The problem is they just could not hind the all-important equaliser, thanks mainly to the herculean efforts of Ali Khaseif, the Al Jazira goal keeper.

The Best Game they Have Ever Lost

Ryan De Vries missed more than once chance to take the team while youngster Callum McCowatt will also be disanointed that he didn’t make more of his first half opportunity. Emiliano Tade was also left wondering while Cameron Howieson was legitimately denied by a massive save from Khaseif.

After the disappointment wears off, we should still be proud of the Auckland City team. After all, we take it for granted that they have been able to compete on the world stage year after year. Not only did they match the performance of a fully professional side, they totally dominated them. This is a side with a budget and resources that are not even close to being comparable.

If we look at the quality of play itself, Auckland city were composed, stylish and created genuine chances. All in all, they were a pleasure to watch and a great team to support. Sometimes luck is just not on your side and that is the way the cookie crumbles.