Barcelona Go Down 4-0 to Paris Saint-Germain 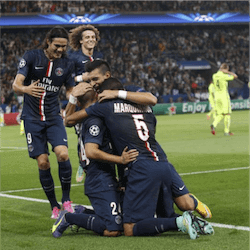 Barcelona Go Down to PSG

The second leg of the Champions League knockout match saw five-time European Champions Barcelona take on the minnows from France, Paris Saint-Germain. While the home crowd were cautiously optimistic, Barcelona were the clear favourites going into the match. By the final whistle, the sound in the Parc des Princes stadium was deafening, as PSG walloped the former champions four goals to nil.

For the home side, it was Angel Di Maria who capitalised on a shell-shocked Barcelona to produce two stunning goals. The Argentinian had been completely out of form for much of the season but showed no signs of his former struggles. Celebrating his 29th birthday, the winger slotted in a perfect free kick in the 18th minute and then neatly skipped past two challengers to blast in a 25-meter kick ten minutes before the break.

Julian Draxler, the German winger also got a piece of the action. Since joining from Wolfsburg, Draxler has been in fine form and displayed his unique talent with a thundering goal late in the first half. Edinson Cavani who also celebrated his birthday, put the final nail in the Barcelona coffin as he drilled in a fourth goal in the 72nd minute. This was his 34th goal in the season making him the top scorer and bringing out from Zlatan Ibrahimovic shadow.

From start to finish, Barcelona looked like a team completely outclassed. From the latter stages of the first half it was clear that the side were focused more on damage limitation rather than actually scoring any goals. The way the Spanish side lost their composure was completely unbecoming of Luis Enrique’s proud team. All credit must be given to PSG though who played with such fervour and determination in front of a home crowd.

Desperate to prove themselves as one of Europe’s elite, PSG were doing everything they could to boost their reputation. After failing to reach the quarterfinals in the past four seasons, the French side had an all-or-nothing game plan that proved to be too much for Barcelona to contend with. In a sharp turn of events, it looks like it will be Barcelona who will not reach the last round of eight. The defeat to the PSG is not only embarrassing, it also equals the teams worst ever Champions League defeat.