Chelsea Goes Through To The Final 16 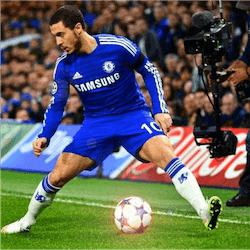 Chelsea became the third English club to make it through to the final 16 of the UEFA Champions League with a crushing win over Qarabag on Thursday. The English Champions cruised to a 4-0 victory in Baku after Qarabag went down to 10 men from a hotly disputed penalty.

The match started out on with promise but quickly swung in favour of the English side when Qarabag’s captain, Rashad Sadygov was sent off for pulling a man down in the penalty box. Eden Hazard was on hand to convert the penalty and put Chelsea 1-0 up with 69 minutes still to play with a 1-man advantage.

After making a promising start, the Azeri champions were completely outplayed and looked lost without their captain to push them forward. Two cracking goals from William put the game beyond doubt while a Cesc Fabregas penalty just added salt to the wounds. Fabregas was actually forced to repeat the penalty after the referee ruled out the first kick due to encroachment from the Qarabag side.

Chelsea’s latest win puts them firmly on top of Group C with 10 points and a guaranteed place in the knockout stage of the competition. They have just one game to go and will remain at the top of their group if they manage to beat Atletico Madrid in Game 5.

Manchester and Liverpool Could Make it Five

Meanwhile, Manchester United needed a goalless draw to book their spot in the final 16. However, the Premier Club recorded their first loss in the group stage, going down 1-0 to Basel. A decisive strike from Michael Lang in the 89th minute was the only goal of the match. Despite their defeat, Manchester United still lead the standings in Group A with 12 points. The only way they will not go through is if they lose by more than six goals on the final game.

Liverpool also looks set to join their English counterparts, making it a record 5 English teams in the final round of 16. They would need to beat Spartak Moscow in their final game to top the tables in group E. Barcelona needed just a single point to reach the final 16. A goalless draw against Juventus, gave them the point the needed, ending up top of group D.

Paris Saint-Germain looked to be heading on a dangerous path when the conceded an early goal against Celtic. The French then pulled it back and then some with a massive 7 goals to get them through as log leaders.