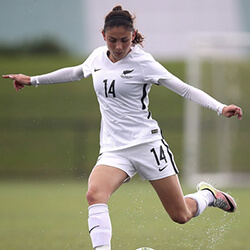 Claudia Bunge, defender for Northern Lights, has been given her maiden Football Ferns call up with centre back Abby Erceg missing their upcoming four team tournament set to take place in China. Erceg will be missing the game due to personal reasons, and Meikayla Moore and Anna green will also not be participating thanks to injuries suffered by both. Bunge is one of five players that have been selected by coach Tom Sermanni who had no part to play in their World Cup campaign in France, where the Ferns finish in last place for their group without scoring a single point.

Forward Katie Rood, along with goalkeeper Lily Alfeld, midfielders Hanna Blake and Jana Radosavljevic, are among the other players that have been chosen, with Katie Duncan entering retirement, and goalkeeper Nadia Olla, midfielder Daisy Cleverly, and forward Emma Kete all missing the tournament. Alfeld has previously been called up in 2014, which was the same year that she attended the FIFA Under 20 Women’s World Cup, but ultimately never took to the field. Radosavljevic, who currently plays for BV Cloppenburg in Germany, was unused on their trip to Thailand at the end of 2017.

The team’s struggle with finding the back of the net had continued in France, where their only scored goal came in the form of their own goal that was claimed by Cameroon, and both Blake and Rood will give Sermanni some more options at attacking their opponents in upcoming events.